The project is part of a contract of the Rives West area of Molenbeek-Saint-Jean municipality. It is set at the corner of the Ostende and Vanderdussen streets, in a densely populated area.

It has eight apartments of varied configurations, from one to four bedrooms, in simplex or duplex. These houses are designed to be managed by the Municipal Administration so as to offer low cost housing.
The building complies with the “passive building” standard, thanks to thick layers of insulating material. The construction materials are chosen by taking into account their environmental balance, their origin and their low embedded energy. These are traditional and well-known materials; this construction model could thus easily be applied to other constructions as well.

By virtue of its geographical location, the project is close to many metro lines.
A bicycle station is provided for residents, thus allowing them to easily park their bicycles once they enter the building. They may use a combination of foldable bicycles and public transport, if need be. The city is all for the cyclists to explore. 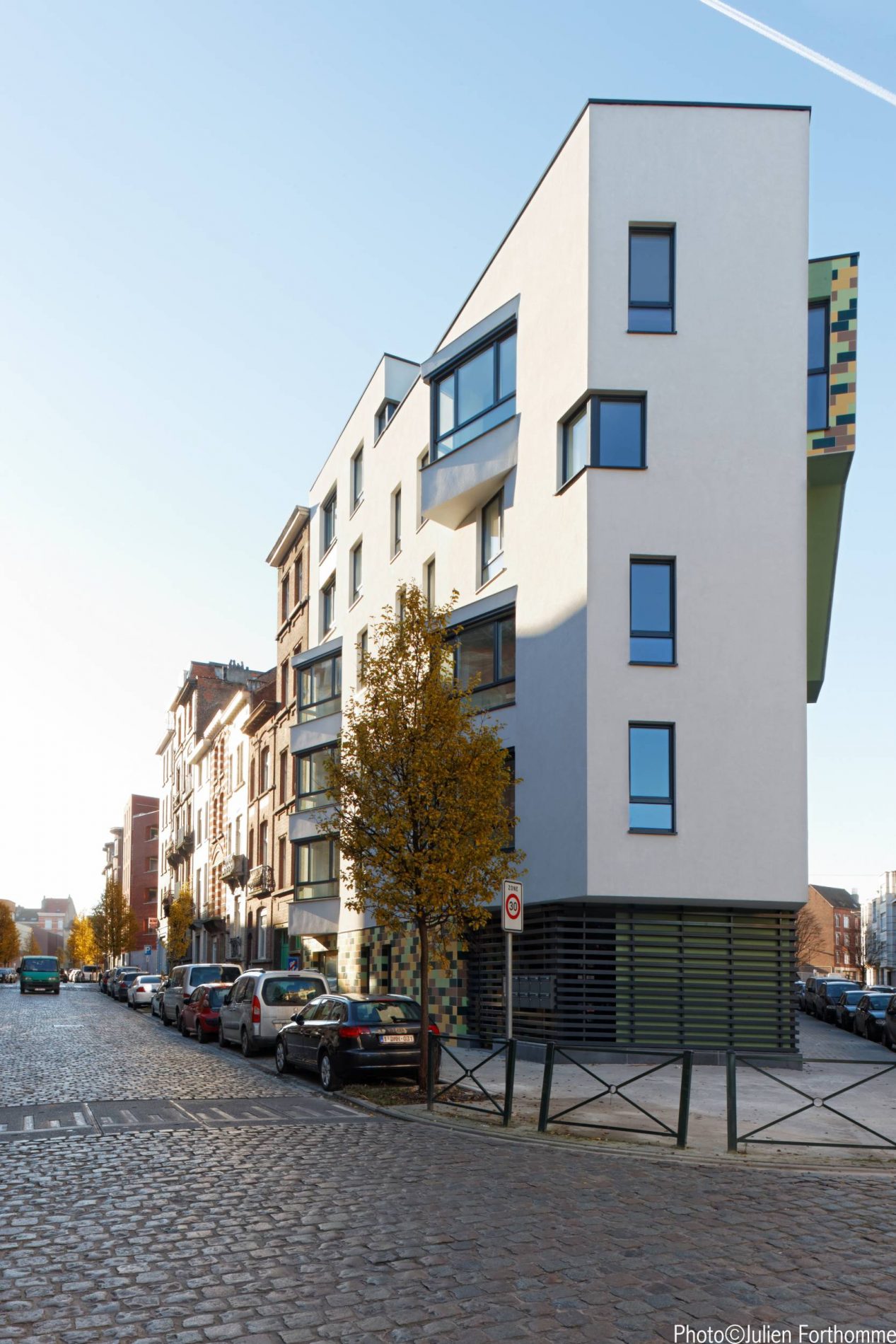 As a housing complex, this project offers certain simple yet effective places for socialisation.

The large entrance hall of the building makes interactions easy without disturbing the movements in and out.

Moreover, the shared premises such as a bicycle station and a pushchair station are provided for residents.

The sharing of these premises encourages meetings. In addition, this project brings about an amalgamation by the diversity in the housing units offered. In fact, the ground floor houses an apartment for persons with reduced mobility.

Building apartments suited for persons with reduced mobility is the first step towards their welfare and contributes to their integration into our society. The rest of the building offers various housing units ranging from one to four bedrooms, intermingling all types of households.

A PLOT OF LAND WITH ORIENTATION AND A COMPLEX SHAPE

Given the space available, it is inevitable to build on almost the entire plot of land. The building reconstructs the facade built at the corner of the 2 streets and its size enables a harmonious connection with the 2 existing end walls of various cornice heights. This building is unique and completely integrated into its site. In fact, it is built on the entire plot of land guided by its distinctive form and its constraints.

The result is a building moulded by its environment, which gives it its place in the existing urban network, thereby completing an integrated complex. According to the principles of bioclimatic design, the architecture of the envelope of the building and the organisation of the plan in accord with the orientation contribute to reducing energy requirements.

In this project, the poor orientation of the plot of land led to the design of bow-windows that are better oriented towards and designed to soak in plenty of sunlight. The living rooms are spread out, especially with respect to the best orientation that the plot of land offers. In the North on the other hand, the drilling work is limited and the premises requiring little heating are set up here, such as the shared premises (bicycle station and pushchair station), the entrance hall and the stairwell.

The plot of land was formerly lined with various plants and trees. To maintain diversity and rain water infiltration, the designers have chosen to lay green roofs on all the flat roofs of the building. In fact, this method helps in planting some vegetation (sedum) and offering an absorbent surface, thus taking care of a time period between the time there was a shower and the storm drainage into the public sewer. 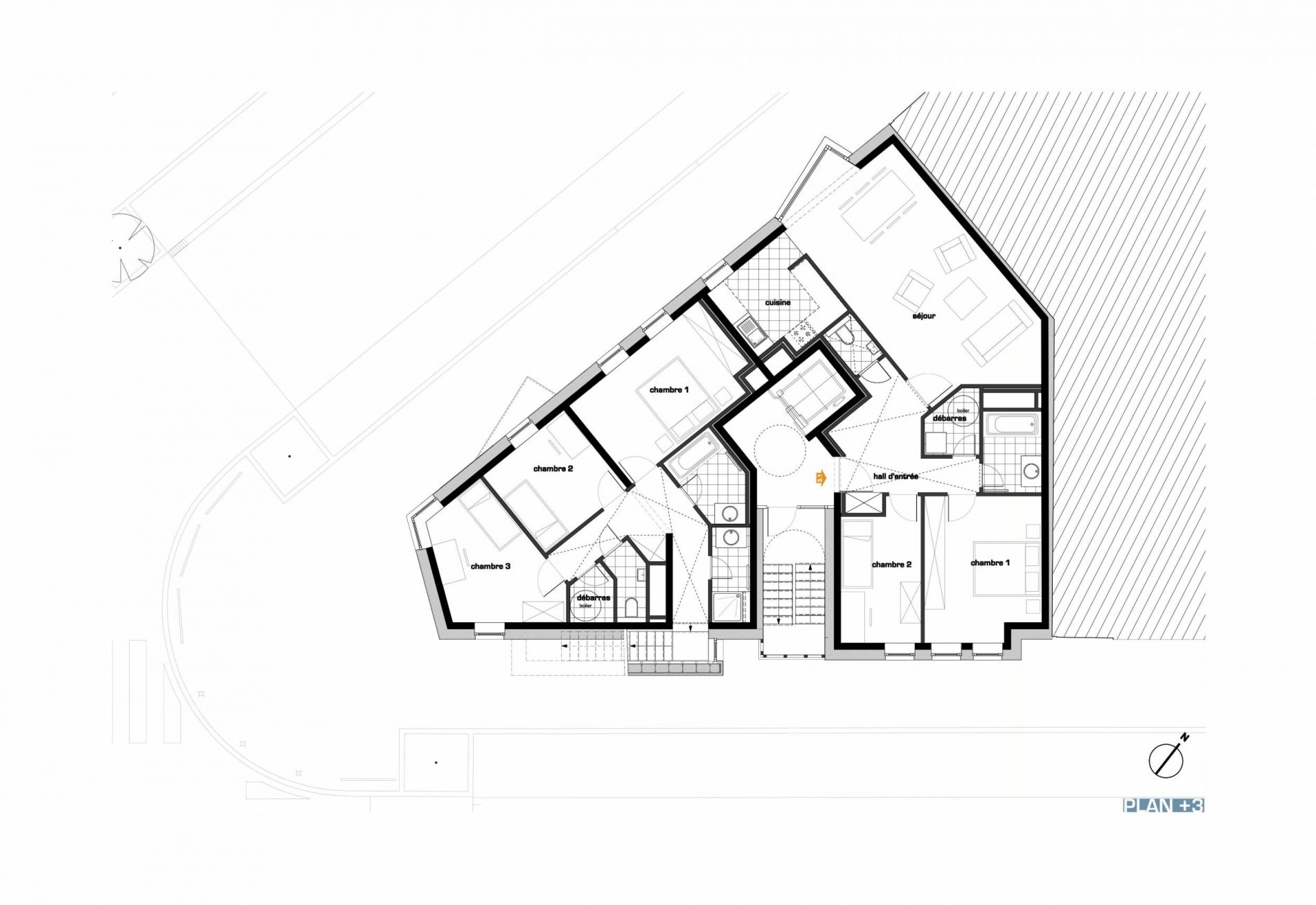 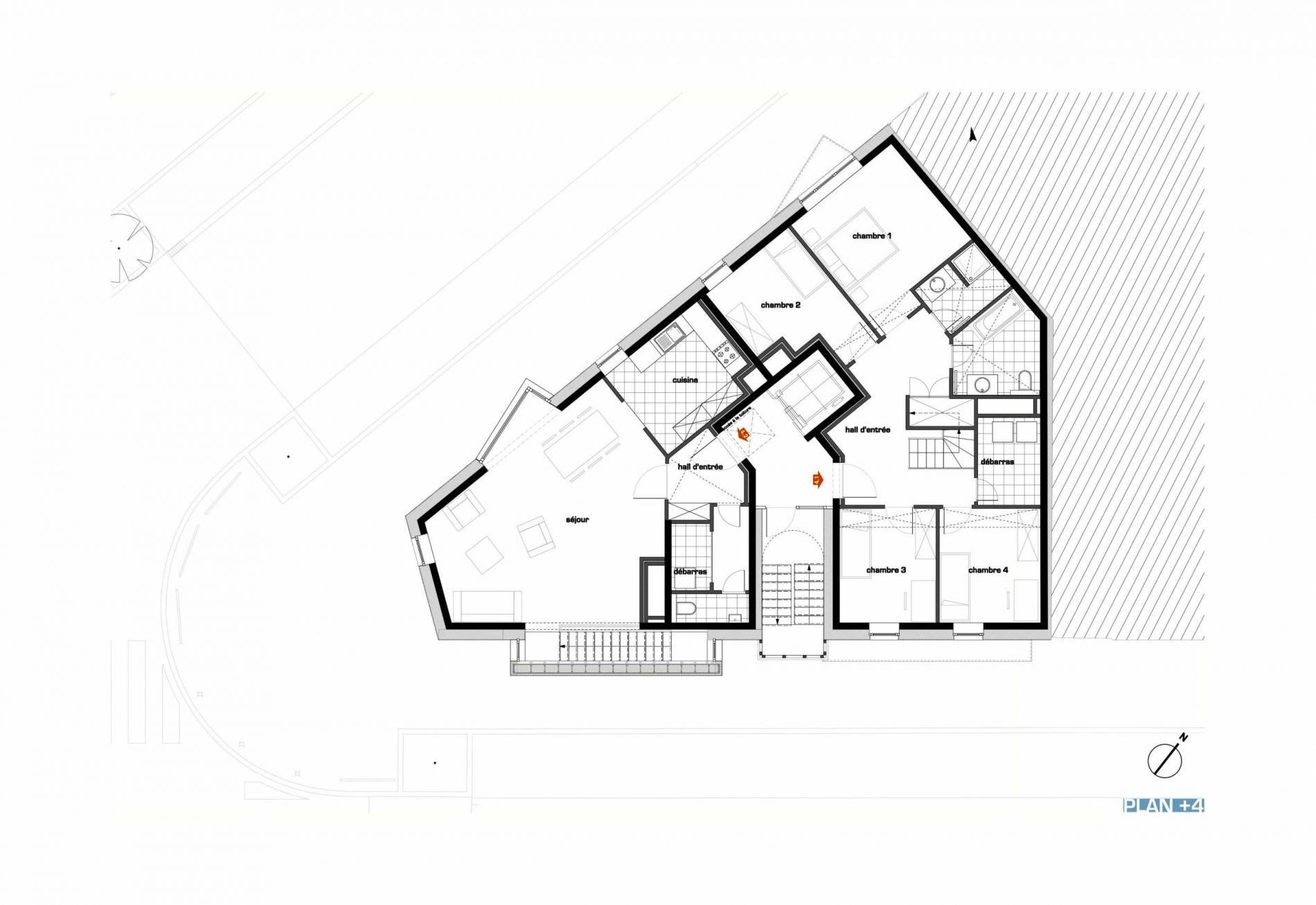 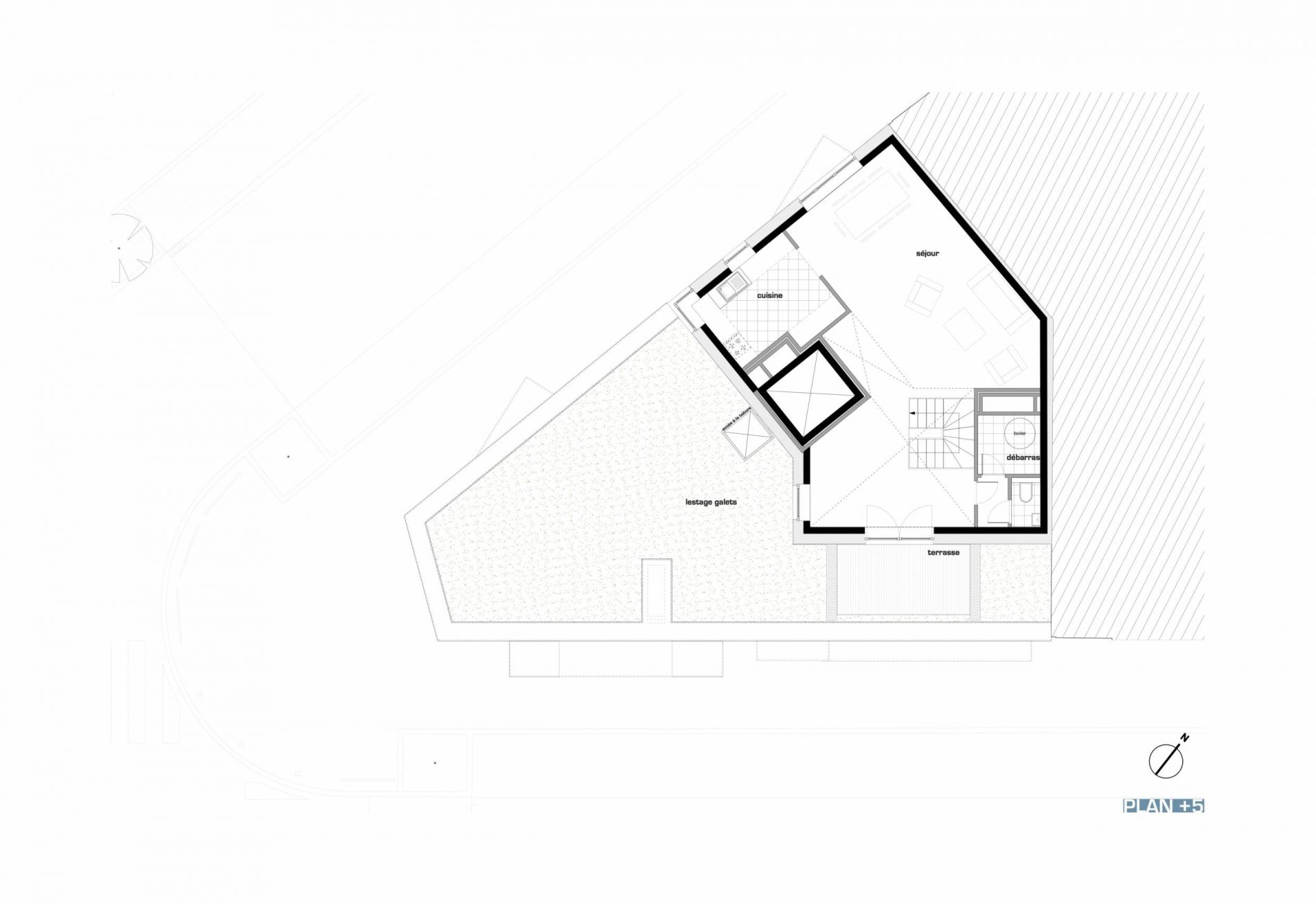 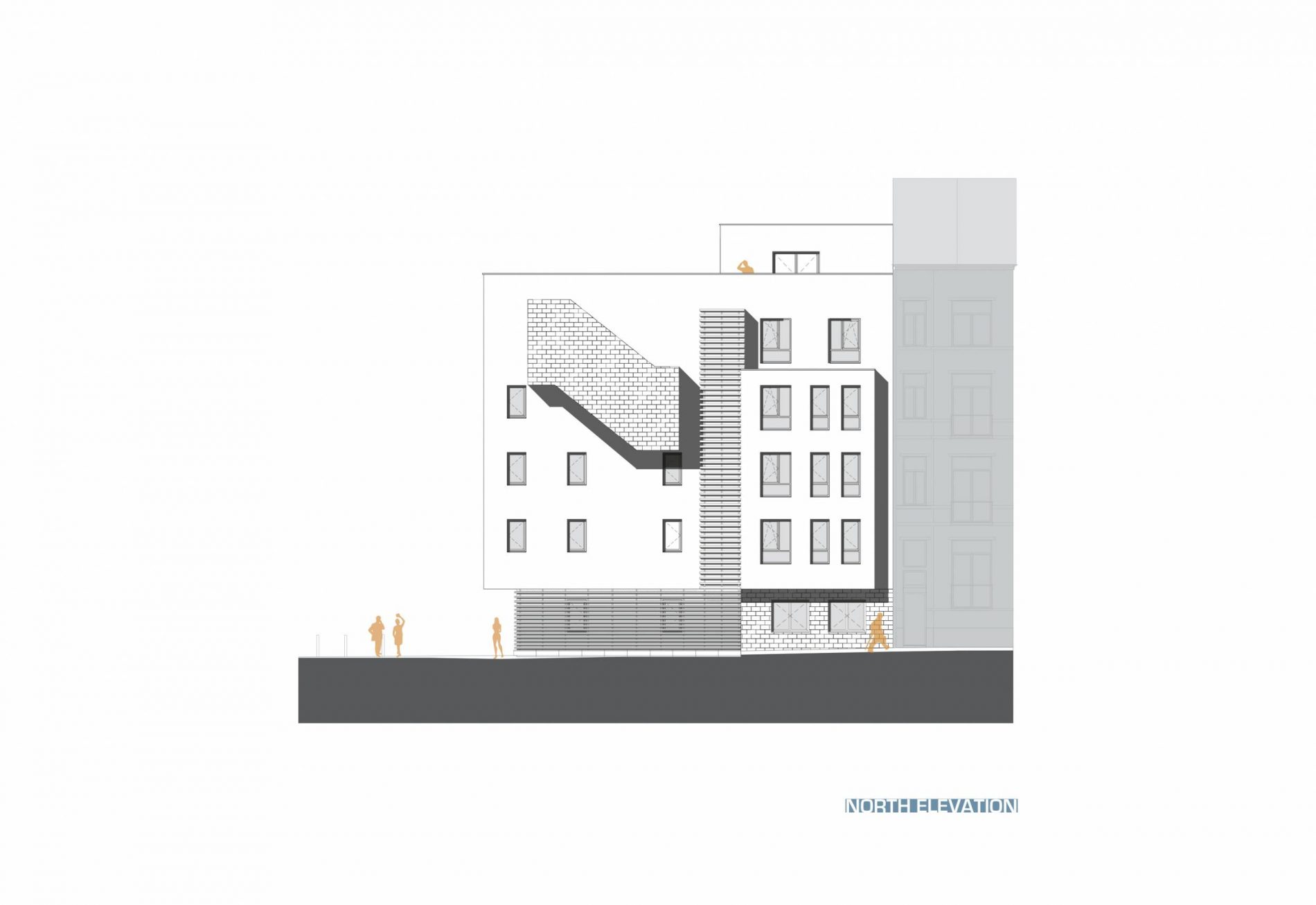 All the apartments are accessible to persons with reduced mobility. It is feasible only by adhering to certain dimensions (refer to CAWaB). The corridors allow wheel chairs to move and rotate easily.

The doors are not only sufficiently wide, but also allow a good grasp of the handle and provide proper clearance of the door. It is necessary to use a lift to access the floors. 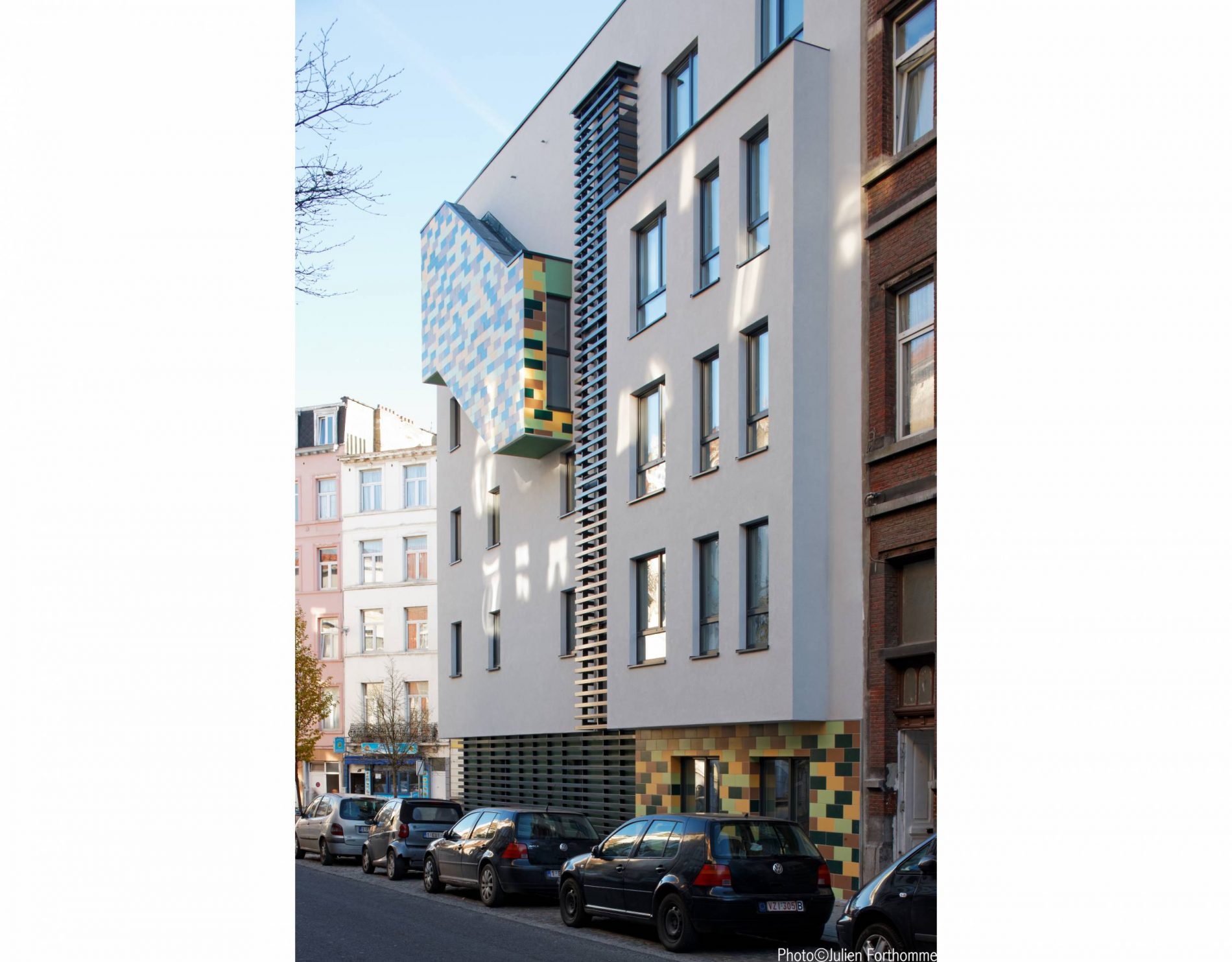 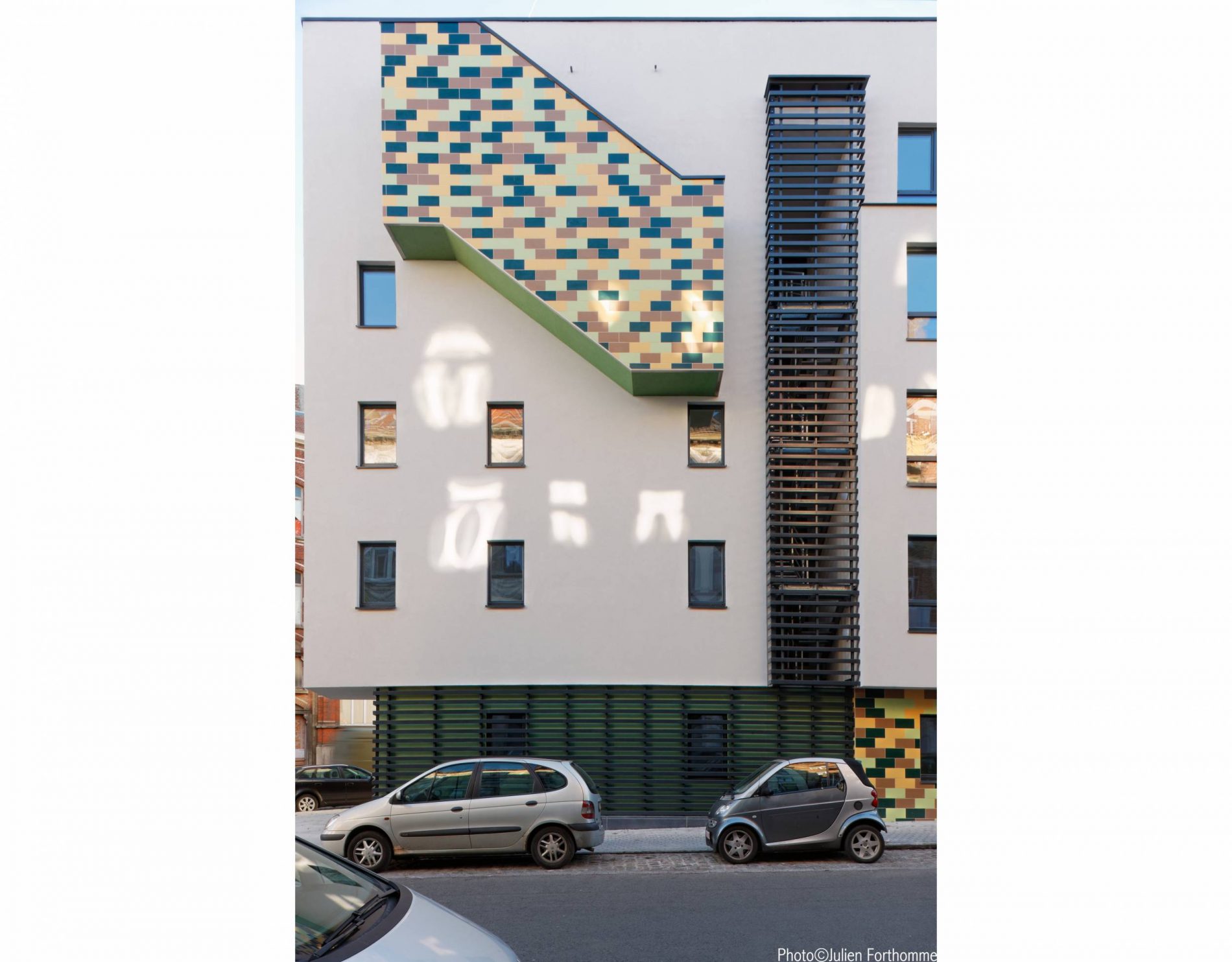 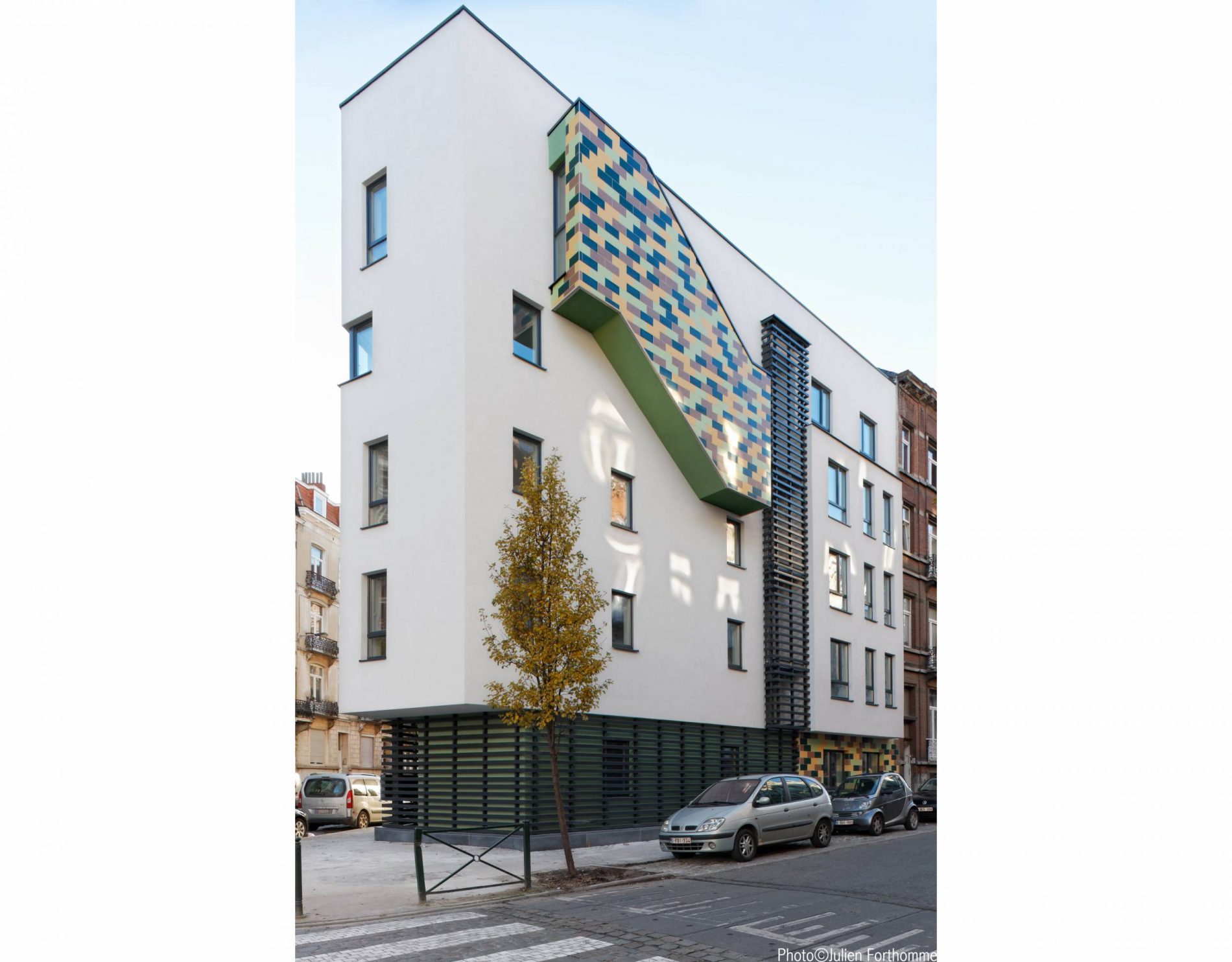 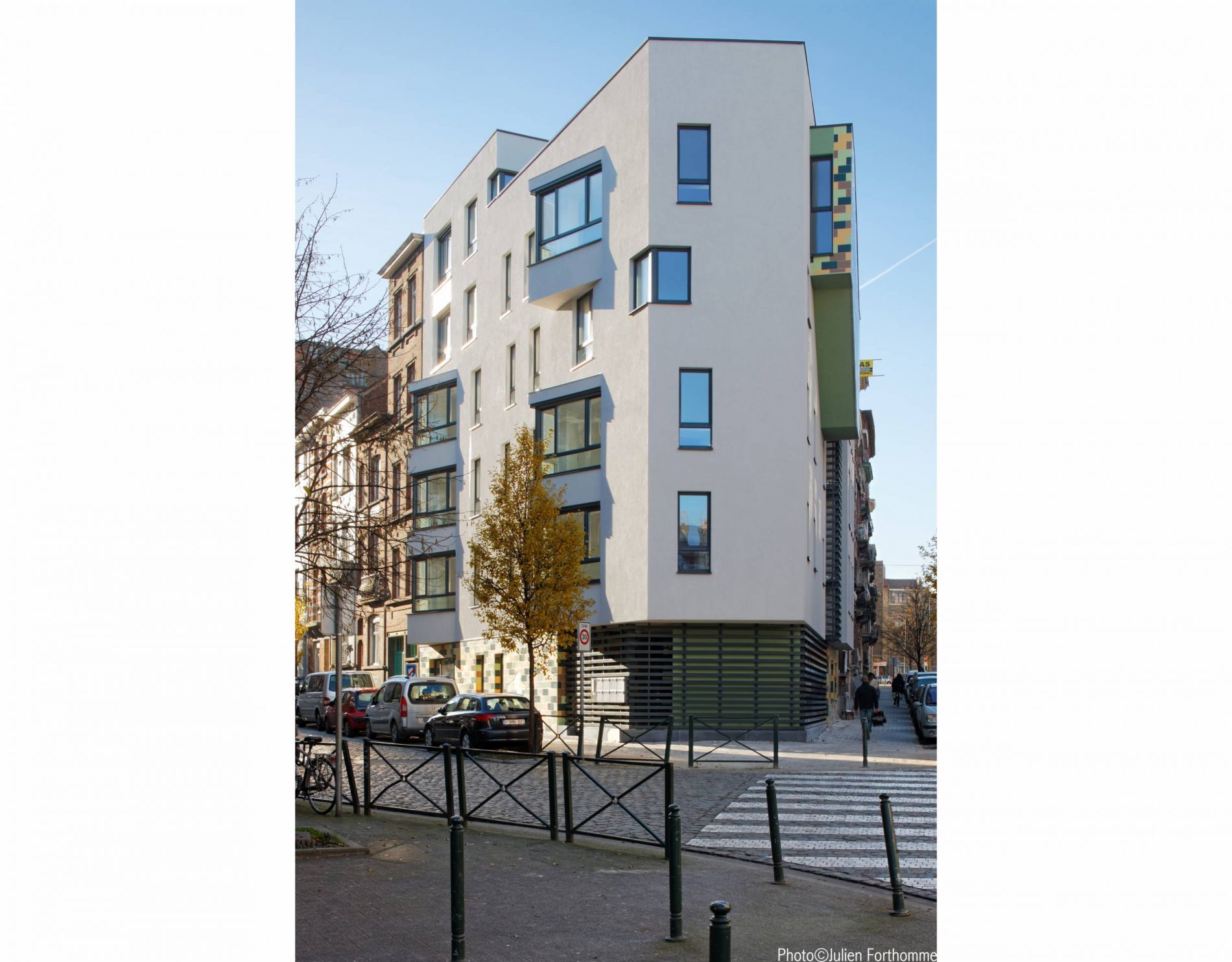 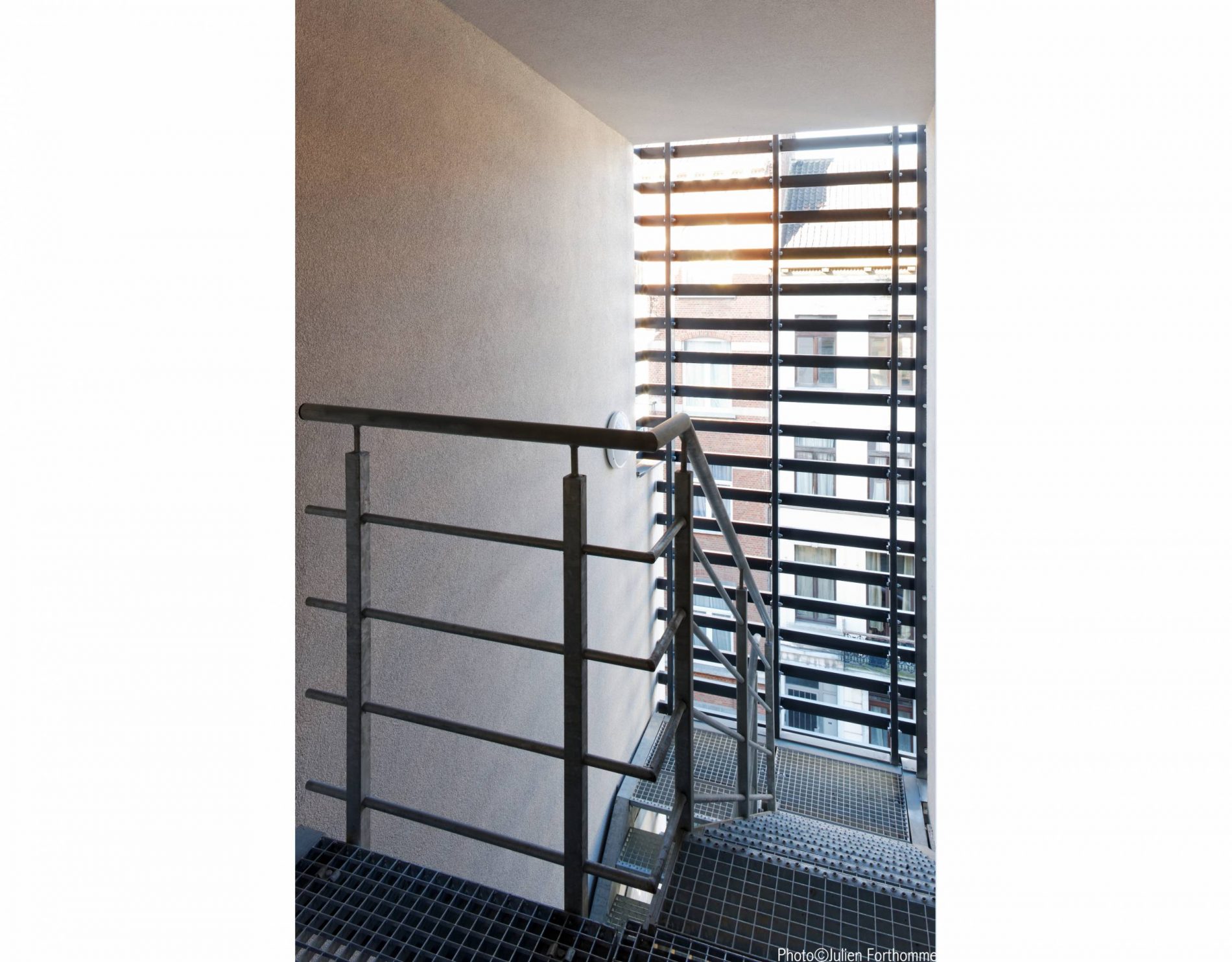 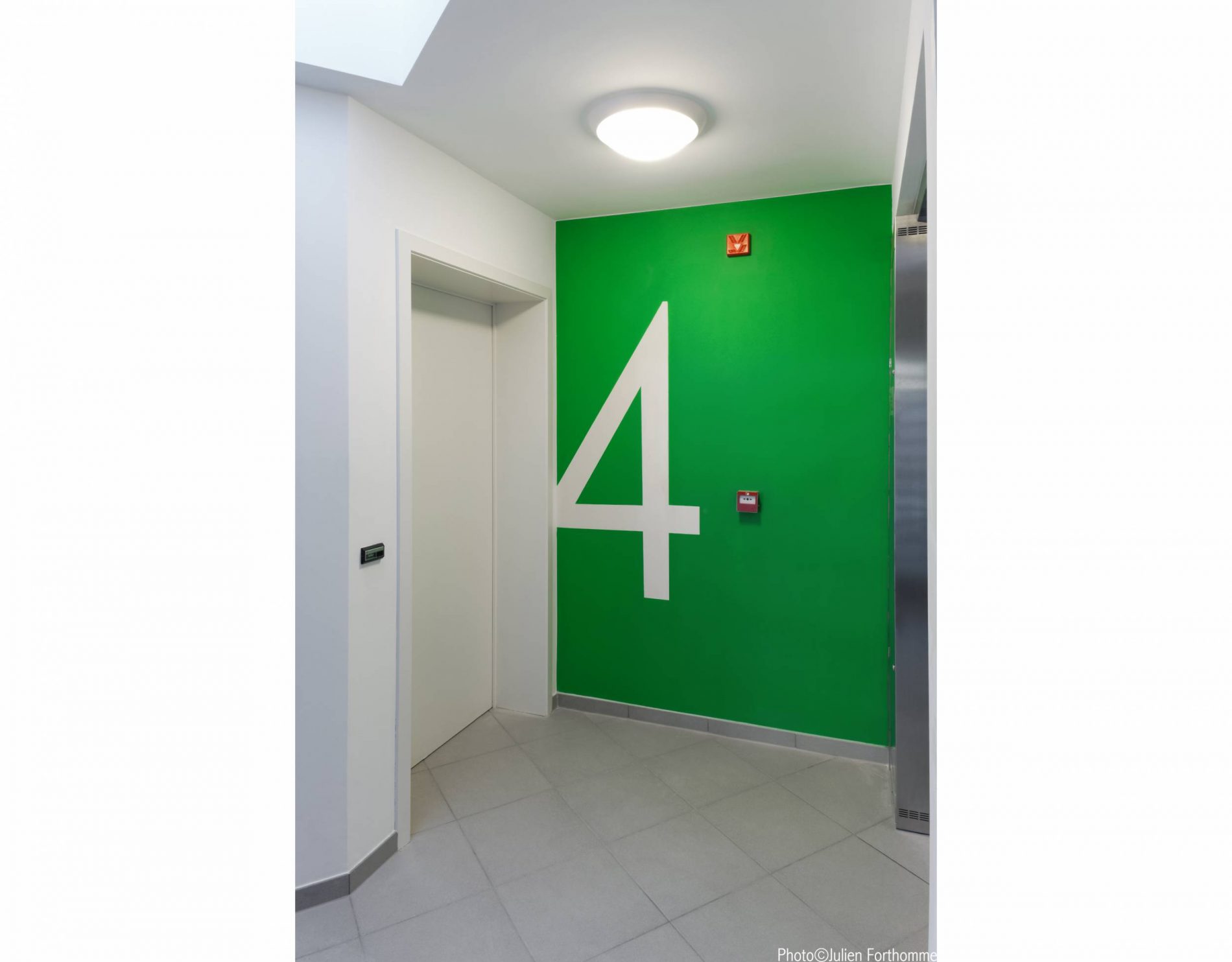 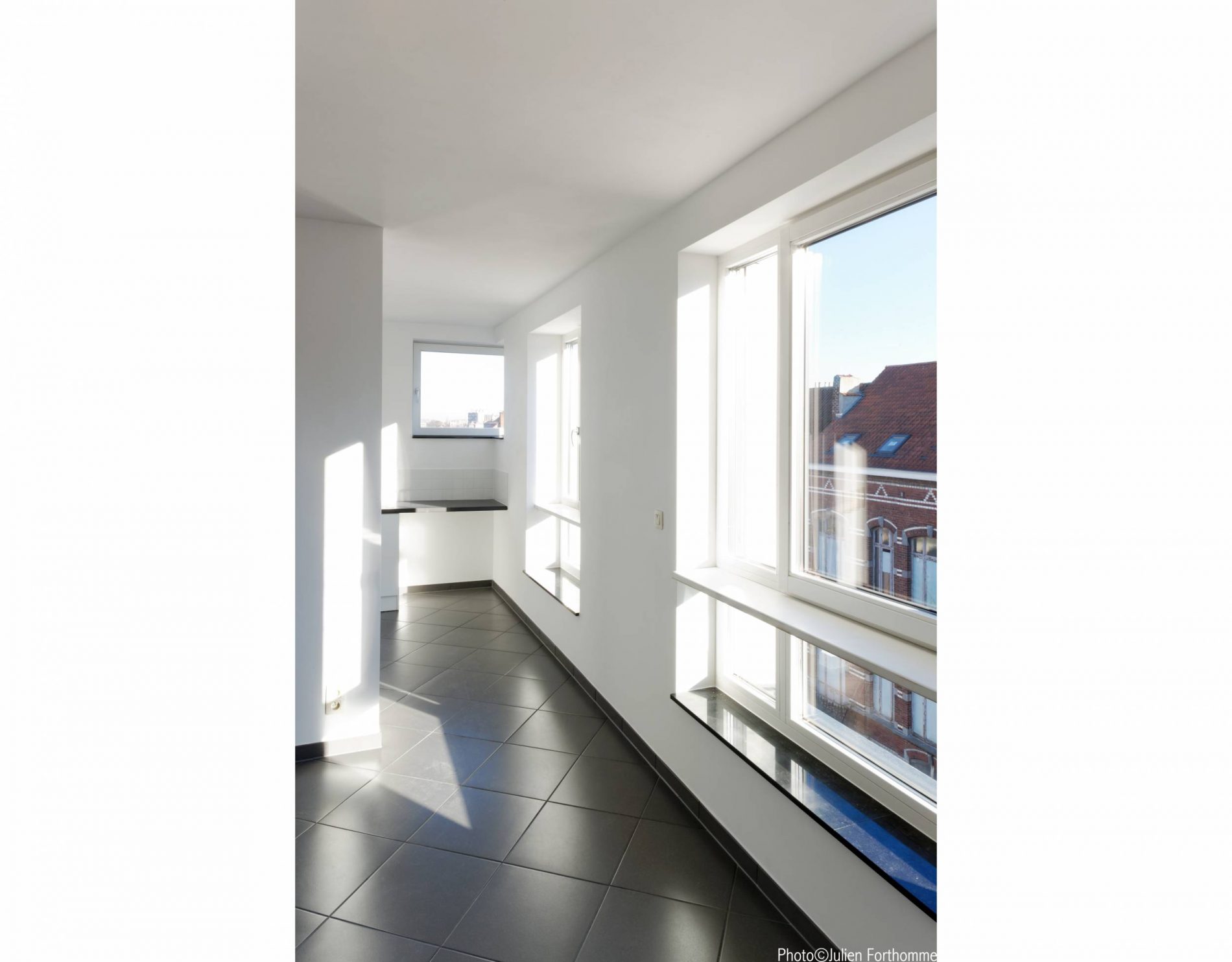